Attention: If you skipped one or more releases, please also check the release-notes of the skipped ones.

When the user uploads images or videos, a new Upload Center is visible in the bottom right corner of the editor screen allowing the users to continue their work in the document while assets are uploaded in parallel in the background. If an error with any of the uploads happens it is shown and logged in the upload center. 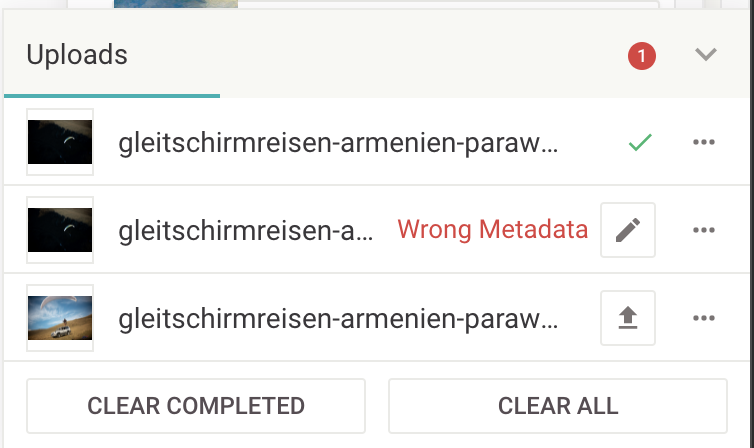 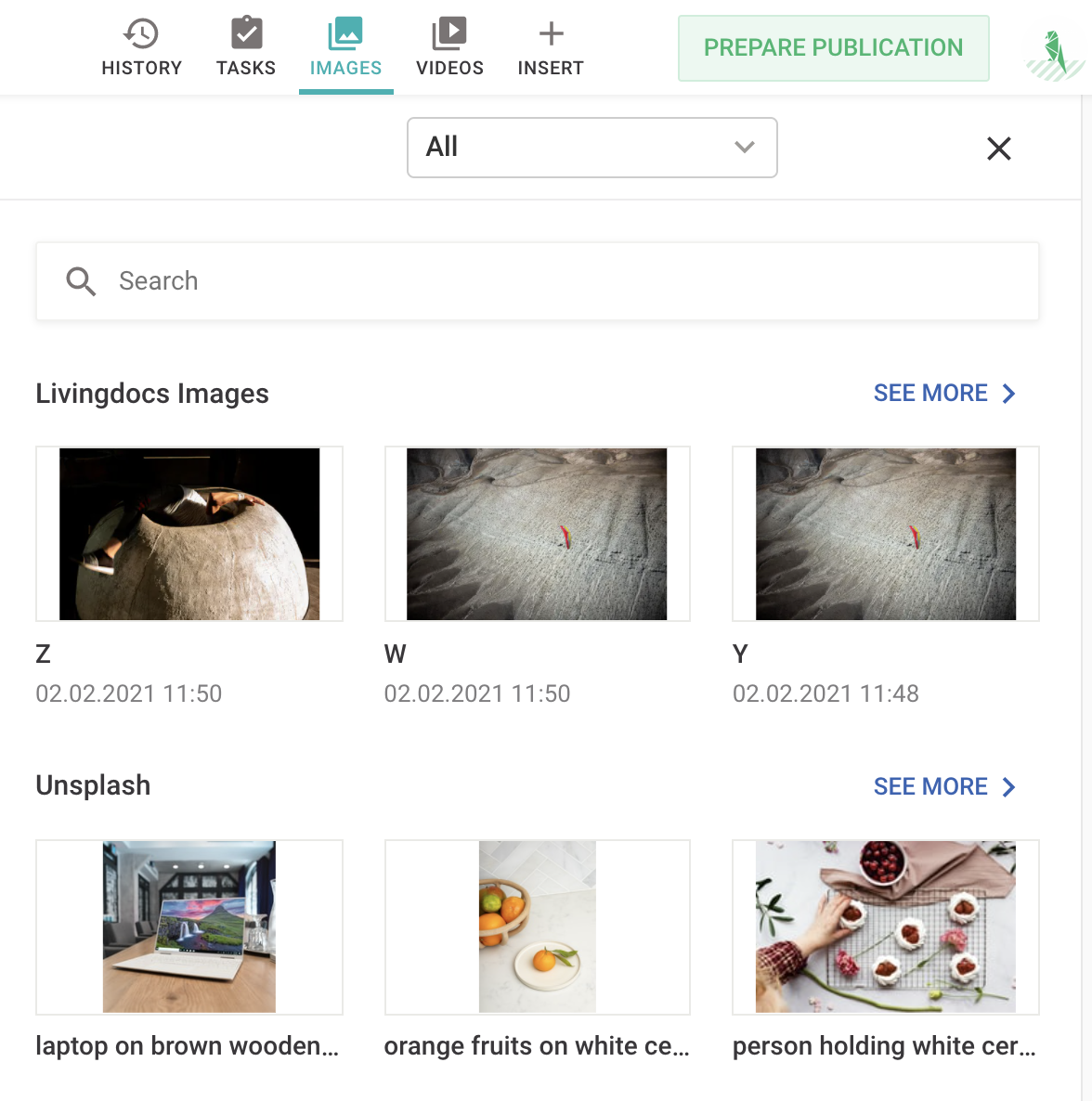 Allow to connect/integrate external asset services (e.g. Unsplash, Shutterstock, Pixabay, …) as a Media Source in the Livingdocs Media Library. Working with a Media Source in Livingdocs feels the same as working with other assets of the Media Library. The examples from the Livingdocs core all include free open source platforms, but of course one could also use media sources to integrate external DAM systems that might already be present in a publishers system landscape and by that consolidate the asset workflow for the journalists into Livingdocs.

The media library dashboard has now the same search and filter capabilites as the documents dashboard. Define which media library metadata are indexed and define dashboard filter for all metadata.

With this release we extend the videos integration in the Media Library with new features:

Even when you are able to use videos in production, there are some shortcomings we want to share with you:

Please get in touch if you want to integrate a transcoding pipeline or a video service.

The Named Crops feature supports multiple crops per image in a document. This allows to preset crops on the master images in the Media Library and on demand overwrite those master crops on the placed image inside an article. Also, the API now provides several crops per image as defined in the named crops settings. 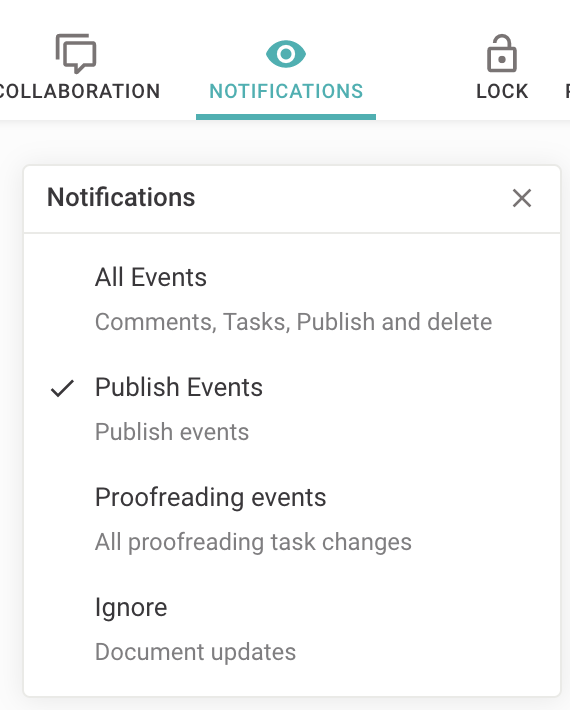 A simpler way to setup Article Teasers is introduced. It is based on Includes and the possiblity to define the UI with a paramsSchema instead of writing code.

There are a bunch of new features for indexing

We’ve added tracing support in the server based on opentelemetry.

We changed editor urls to contain the project handle so links work reliably in multi-project setups. This is the new pattern - https://0.0.0.0:9000/p/<your-project-handle>/articles/<article-id>

A server admin can now reindex every existing index. 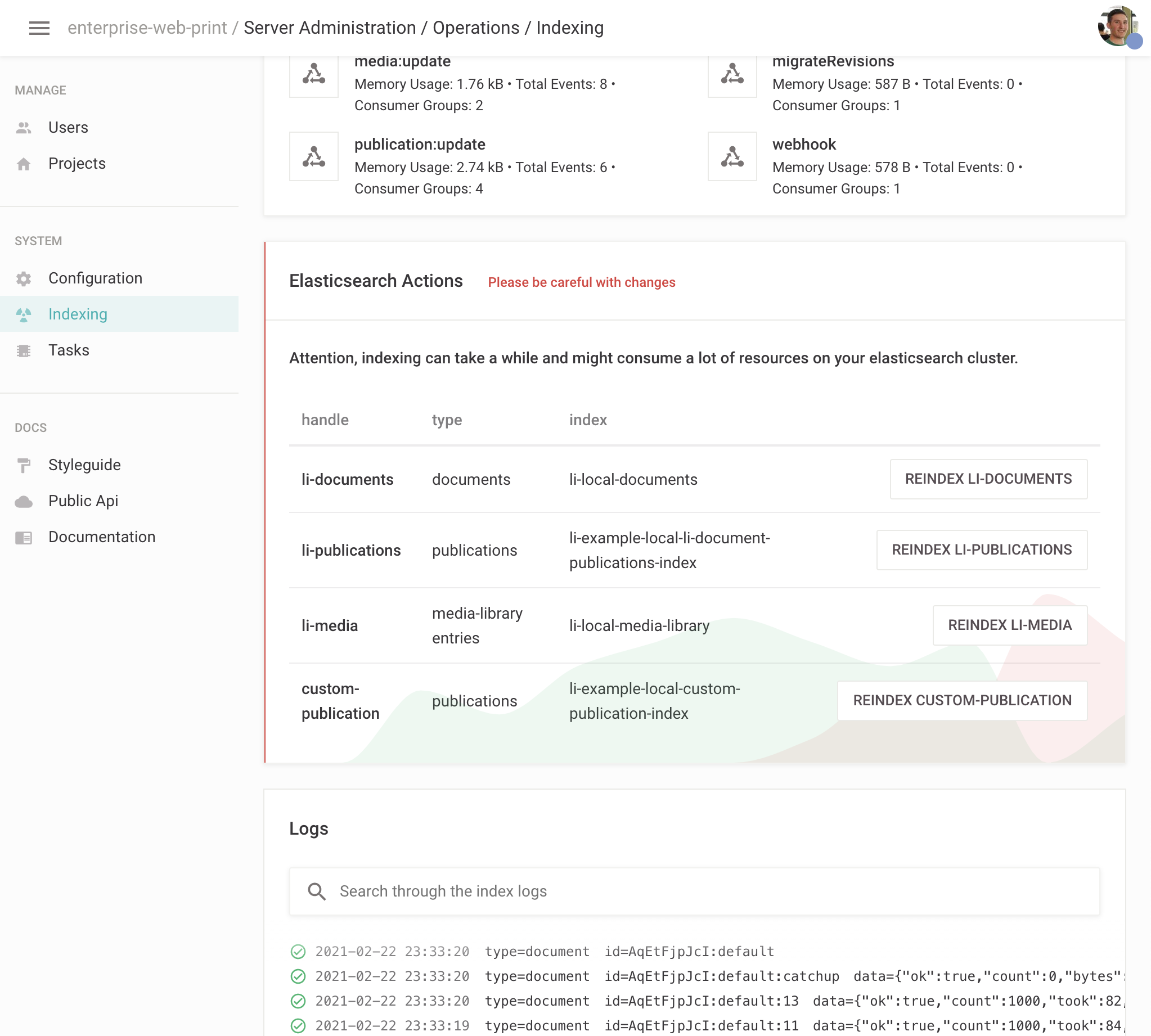 We support now OpenID Connect for a SSO connection. This allows customers to setup 2-factor authentication and external group management.

🔥 Attention, in this release we clean up some data structures to have better options for the future. This section contains tasks you have to do after the deployment was successful and the new version is running properly.

We changed the doc-link and doc-html directives to be objects instead of strings (see here to compare the 🔥 old/new format).

After the deployment (when everything is running fine again) you should run the task 🔥 npx livingdocs-server revision-migration -t doc-link-and-doc-html -y. This migrates all old revisions to use the new data format.

The default revision migration is quite slow and can be run in production without any impact. The revision migration should be run through all stages of deployment (dev, stage, prod). If you want to choose a more agressive approach outside of business hours, you can change the scheduler settings in the server config.

🔥 Please make sure that all code that consumes Livingdocs (web frontend, native apps, etc.) support 🔥 both formats and are still working as expected.

As described in the APIs section, we extend some endpoints (public API + server API) with reference information of a document. Old document references need to be converted into the new format with a manual db migration.

After the release, execute the manual db migration node node_modules/@livingdocs/server/db/manual-migrations/006-generate-references --concurrency=5. If you have issues with memory, you can reduce the concurrency and it’s also possible to run the script multiple times.

These are the key changes/issues

We’re having some customers running an old state of the groups tables which got partially corrupted by some old user merge logic that we’ve fixed about a year ago. The new release-2021-03-fix-group-memberships command fixes those tables completely.

The html and link directives are now data directives, i.e. store object literals. This means that the getContent() method will return an object literal and not a string value anymore. The change looks as follows.

🔥 This change requires you to change all cases of getContent on link and html directives in your code. In particular look out for custom document conversions and include code.

If you used direct JSON access in a livingdoc directive (not recommended), you will also need to change the access.

Use One Time Rendering by Default 🔥

The CheerioHtml output renderer for the render-pipeline now uses the frameworks one time rendering by default which is 10 to 20 times faster but has a few minor differences in render output.

Things which are not rendered anymore by default:

You can still use the old renderer with CheerioHtml({useLegacyRendering: true}) in your contentType configuration.

If you use custom outputFormatters which use the frameworks rendering you should switch them to livingdoc.render(). This gives you a big performance boost (10x - 20x faster) and ensures consistency with the new default of the CheerioHtml output renderer.

🔥 To support ~lib requires in downstreams we expect npm > 7

It’s a simple/fast migration with no expected data losses.

These Postgres tables have been removed:

🔥 Please make sure that you don’t directly access those tables in your code.

Removed all Grunt tasks. If you still need a task, you can just copy the code to your downstream. But almost all functionality has been replaced with livingdocs-server CLI and the editor administration UI. Please give us some feedback when you miss some functionality of a Grunt task, so we can provide that in the future in another form.

The document.update event will only receive user: {id: userId}. Previously the user object could have more params on it (like admin or project_id) depending on what user object was passed into documentApi.updateV2(). Note that currently it is also possible that user: {id: undefined} is passed as the user.id is not required in documentApi.updateV2().

🔥 Removes the li-netlify-publish-hooks feature (which seems not to be used by anyone) as the more generic webhooks feature already offers the same behavior. The webhook documentation can help to migrate the feature.

🔥 removed the editor config app.ui.article.publish.cropStyles. It has no effect anymore

Upload Media Assets via Streams instead of a Buffer 🔥

🔥 groupApi.updateGroup({..., version}) - version changed the optimistic locking behavior. Previously when doing an update against a group, the version must have been +1 of the state on the server. When doing requests from now on, the version in the request must match the version on the server.

🔥 If you have downstream Angular templates, change all XHTML like closing tags <some-tag/> to valid HTML5 <some-tag></some-tag>.

If you want to keep the filters, you need to move the config to the mediaType project config.

Prefix all app Routes with a Project Handle 🔥

🔥 We renamed all ui router application states. All states for the editor routing are affected. Examples, where it could be used in customer projects are:

In most cases this is the easy migration guide for almost all states prefixed with ‘app.*’ Before: $state.go('app.welcome') After: $state.go('project.welcome')

If you still want to use coffeescript, you can require it manually, e.g. node -r coffee-cscript/register node index.js.

💣 Node 12 is deprecated. Please upgrade your Docker images and local environments to node 14.

This follows our upgrade cycle that we drop the old lts version one year after the introduction of the current LTS version.

In your Docker images change

In your .nvmrc (if present) change

The server config swisscomTV.customLanguageHandle is not used any longer for the reference extraction. All metadata of type li-language will be extracted to the references if they have a groupId.

All callback functions on the server are now in deprecated state. We will start removing callbacks and switch to a promise based only approach.

We worked on document reference extraction. The list below contains public APIs and server APIs with an additional reference property in the response. Look into the documentation to get different types of references. References can be used for static page rendering strategies where updates of references in a page, e.g. teasers, must be identified.

A context (max 8192 bytes) parameter can be passed to:

If the webhook parameter is defined as well, context will be passed to the webhook once the job is finished.

For all public API endpoints documentation, go to ‘https://your-editor.com/public-api'.